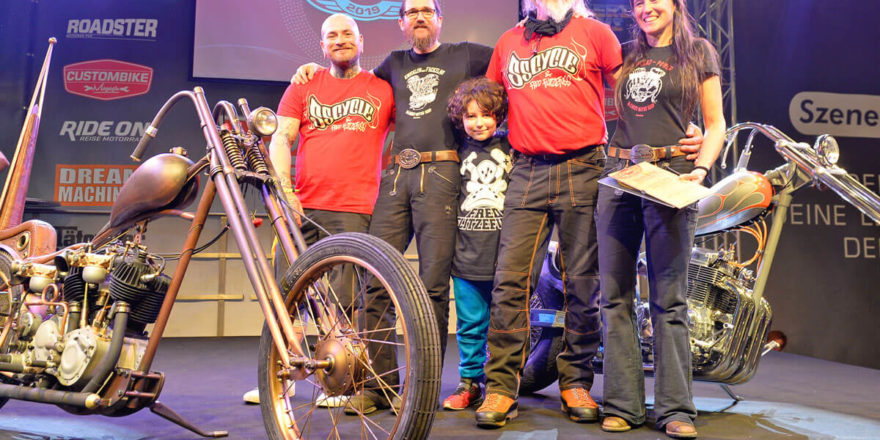 Review of the European biker build-off 2019

At this year’s CUSTOMBIKE-SHOW, the Swiss Sandra and Markus Fröhlich (MCSands Motor Shop) competed against their German opponents Stephan and Max A. Schneiderbanger (SS Cycle/Fred Flitzefuß Karosseriebau) for the victory of the European Biker Build-Off 2019.

it was a duel of two family-run buisinesses: the married couple Sandra and Markus Fröhlich (McSands Motorshop) from Switzerland and the German father-son team Steve and Max Schneiderbanger (SSCycle/Fred Flitzefuß). It was a duel at eye level, which was characterized by mutual respect and friendly cooperation – something rather unusual in this renowned and internationally noteworthy competition. While the German team put a Honda CB 750 engine between the springloaded frame tubes, the Swiss team decided to use a nostalgic Harley racing engine from the 20s. The McSands engine builder Sandra Fröhlich gave the V2 power unit the finishing touches live on stage, before it was ultimately put into a handmade rigid frame. In the end, the crowd made a close decision and chose the straightforward long fork chopper built by the Swiss team as the winner of the European Biker Build-Off. Together, both teams lifted the trophy into the air, nobody felt like a loser that day.