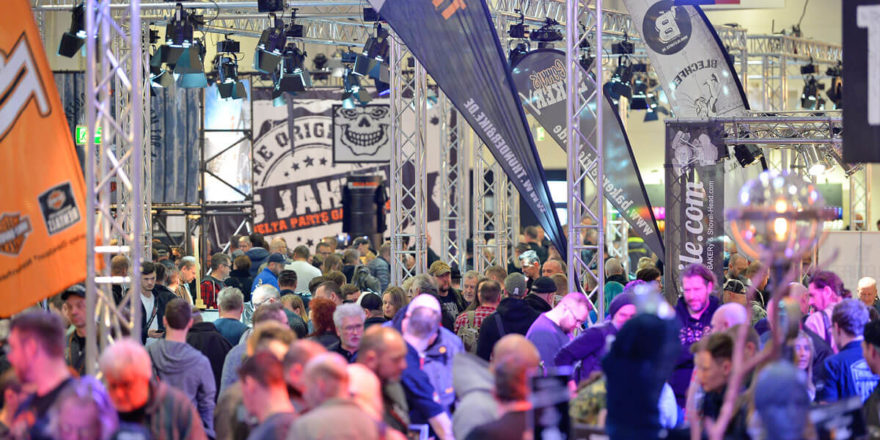 Full house at the anniversary

More than 32000 visitors made the trip to the exhibition center Bad Salzuflen from December 6th to 8th, to experience the 15th edition of CUSTOMBIKE-SHOW. With four exhibition halls, 28000 square meters of exhibition space, more than 300 exhibitors and roundabout 1000 custombikes, the event remains the world‘s biggest exhibition for modified motorcycles.

One of the event‘s undisputed highlights is the European Biker Build-Off, in which two custombikes are being assembled in front of the audience during the three days of exhibition. In 2019, it was a duel of two family-run buisinesses: the married couple Sandra and Markus Fröhlich (McSands Motorshop) from Switzerland and the German father-son team Steve and Max Schneiderbanger (SSCycle/Fred Flitzefuß). It was a duel at eye level, which was characterized by mutual respect and friendly cooperation – something rather unusual in this renowned and internationally noteworthy competition. While the German team put a Honda CB 750 engine between the springloaded frame tubes, the Swiss team decided to use a nostalgic Harley racing engine from the 20s. The McSands engine builder Sandra Fröhlich gave the V2 power unit the finishing touches live on stage, before it was ultimately put into a handmade rigid frame. In the end, the crowd made a close decision and chose the straightforward long fork chopper built by the Swiss team as the winner of the European Biker Build-Off. Together, both teams lifted the trophy into the air, nobody felt like a loser that day.

No less thrilling was the final of the International Custombike Championship Germany (ICCG), where an expert jury had the difficult task to name their favourites out of more than 300 modified motorcycles. After some heated discussions, sixteen bikes and their owners stood on the stage to accept their well-deserved trophies and certificates. »Best of Show«, the winner of all categories, was Mario van Kruysbergen from the Netherlands with his radical Harley-Davidson compressor Ironhead. In addition to the prize money of 1500 Euros, he got a trophy made by Berserker Metal Tattoo in month-long handiwork.

All these modified machines were joined by series manufacturers with spectacular premieres. BMW Motorbikes had chosen CUSTOMBIKE- SHOW to present the R18 Concept /2 as a world premiere. The highly anticipated sound of the 1.8 liters boxer engine, which will only be employed serially in the second half of 2020, could first be heared. The new models from Indian, Kawasaki and Triumph were presented for the first time on the CUSTOMBIKE-SHOW stage, as well, where they were greeted with a lively interest from the crowd. Just the same as the election of Miss CUSTOMBIKE, where the audience chose Laura Scott as this year‘s title holder. For the first time, the final of the renowned Tattoo Starlet Contest also took place in Bad Salzuflen. The expert jury had invited nine out of more than 200 applicants to the great showdown. In the end, the nineteen-year-old Saskia Deml prevailed over the competition, not only securing an exclusive photo shoot for TATTOO EROTICA and TätowierMagazin, but also a strong benefit for her modeling career. Then, there were presentations of numerous custombikes, performances, daredevil rides on the steep face, live music from Rocco Recycle and Jimmy Cornett, as well as daily visitors‘ lotteries. Especially happy were, of course, the winners of the main prizes: Honda Monkey, Triumph Speed Twin and Harley-Davidson Sportster with an overall value of more than 25000 Euros.

And then there were the small ones that went strong. The lovingly arranged special exhibition, »Halbstark«, which means rowdy, showed thirty highly exceptional 50 ccm mopeds and transported the spectators back into a time, where the freedom on a bike could be measured with the size of a shot glass. Two-stroke bangers like the unique AME Easy Rider moped or the original mopeds from the German blockbuster film »25 km/h« provided bright eyes and let even grown men submerge back into the dreams of their youth.

In 2020, unique, phantastic and crazy motorcycles from all over the world will be on display at CUSTOMBIKE-SHOW once again. You better mark down the date already: December 4th to 6th, exhibition center Bad Salzuflen.